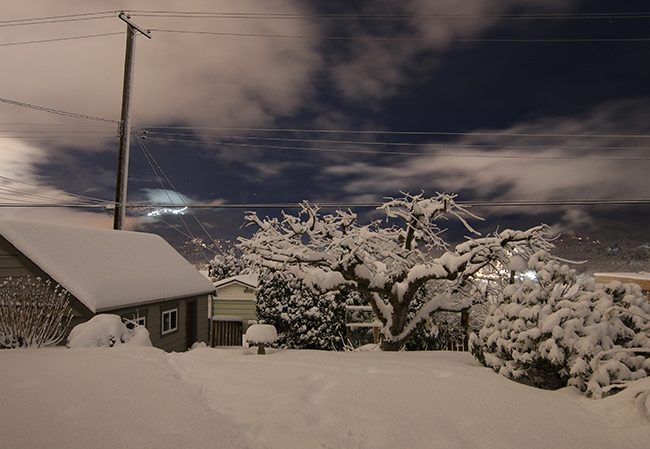 The late winter storm that hit the south coast of British Columbia set a couple of daily snowfall records in Vancouver. Snow began falling the morning of Friday, February 23 and continued, at times heavy, non-stop into Saturday morning. Many parts of the region received a foot or more. It wasn’t particularly cold. Here in Burnaby, the temperature hovered around -2C (28F) through most of it. The skies began clearing Saturday morning, bright sunshine poked through, and neighborhoods came alive with kids and families out to make the most of it. Because here on the Wet Coast, we only get a few good days of sledding and snowman-making and snowball fights in a typical winter. And climate scientists tell us we will get fewer and fewer days like this in the coming years. That prediction seems alarmist at times. Last winter was one of Vancouver’s snowiest on record. This winter brought several good snowfalls. Outside of El Niño years, our ski hills continue to enjoy banner seasons. But this is weather. This is year-to-year stuff. The long-term trend, the climate trend, so far appears undeniable. The planet is warming. Yep, there are some very cold winters. We still set low temperature records. There are still blizzards and years when even the Great Lakes freeze up, as they did in decades past.

This temperature trend chart from NASA tells the real story:

NASA’s research tells us that 17 of the 18 warmest years in the 136-year record all have occurred since 2001. While the biggest catalyst for these increasing temperatures is most certainly man’s burning of fossil fuels, long-term natural cycles are likely contributing as well. In any event, mankind is entering uncharted territory.