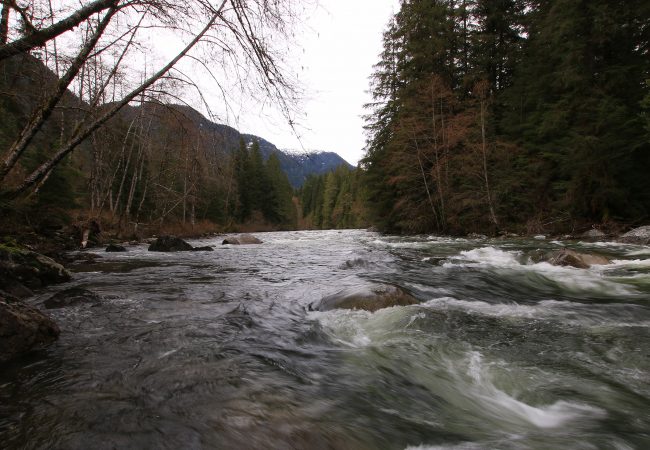 Work hassles, spring fever and heavy rain brought Mr. Grumpy into the office. So I did the only sensible thing. I shut off the computer and headed for one of my favorite places: Fisherman’s Trail along the Seymour River. Within 20 minutes, I was walking beneath old evergreens sheltering a river where the water is still clean enough to drink. Skunk cabbage along the Seymour River. A sure sign of spring!

Over thirty years ago, when I first discovered this haven, the trail was a rugged, narrow, track overgrown with salmonberry. I could catch steelhead here any month of the year, some mornings releasing five or six bright fish.  A few weighed ten pounds or more. The best fishing was in March, with skunk cabbage poking through the muck and Varied Thrushes buzzing in the alders. In the fall I caught coho and chum salmon.

Most days I had the river to myself, once encountering a bobcat sauntering along a gravel bar. There was always fresh bear and cougar sign, but thankfully I never came face-to-face with either. In the fall I sometimes had staredowns with wide-antlered blacktail bucks. Crazy in rut, they would refuse to yield the trail. This wild setting lies only 15 kilometers (eight miles) from downtown Vancouver’s financial district. You get there by hiking or cycling.

The trail is more like a road, now. Straight and easy, smoothed with crushed gravel, wide enough to accommodate a pickup. Even on weekdays, far upriver in near wilderness, you’ll share your space with mountain bikers and runners in Lulu Lemon gear. The deep solitude is long gone.

The fishing is gone, too. The steelhead run dwindled to a trickle after the Nineties, until a massive rockslide in 2014 blocked their path entirely. (A number of groups and government agencies are working to clear it. They need money.) I rarely see deer or any bear sign. I suspect the constant traffic has pushed them out.

The birdlife remains abundant, especially in the late spring and summer when a variety of warbler species animate the treetops with song and flashes of yellow, orange, white and red. There are bald eagles and hawks, owls and ducks, jays and woodpeckers. On this day, I was quite fortunate to encounter a Northern Pygmy Owl. I’d have missed him had he not fluttered down to grab a worm.

Since I first trekked up the Seymour in the Eighties, the Vancouver region has added over a million people. I suppose it’s inevitable that a beautiful sanctuary like this would be discovered by the growing masses. Still, did they have to make the trail as wide as a road? There used to be a rustic, meandering boardwalk through a swampy section. It’s filled in with gravel now, because…why? Did some mountain biker slip and break a bone? Was there a lawsuit, because it wasn’t one hundred percent safe? Does everything have to be graded and easy and risk-free?

There were many times I stood on that old boardwalk and watched coho salmon thrashing their way up the shallow creeks and rills that ran beneath it. Now there are solid bridges and culverts and dumped in rip-rap. All because we have to make sure nature doesn’t get out of hand and cause us any difficulties.

Still, I remain grateful that such a beautiful place lies within a very short drive. We are blessed in this city. “An embarrassment of riches” was how a client visiting from San Francisco described it. I suppose he was right. I just don’t want to see those riches squandered.

BTW…Need a regular nature fix? I’d love to have you subscribe! I post photos and a short article every week or so.