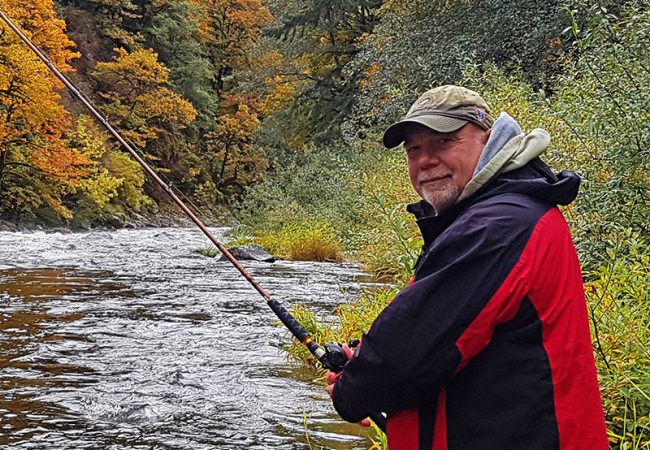 The free-flowing Siuslaw River heads west from the coast mountains near Eugene, Oregon and enters the Pacific at the town of Florence. For being so close to Eugene and Springfield, the river valley is remarkably pristine and sparsely populated. The fishing’s good, too. The Siuslaw supports one of the Northwest’s best runs of fall Chinook. Steelhead move up the river from December into March. Fly-fishers like to target sea-run cutthroat in August and September.

Rod, Larry and I fished for Chinooks in mid-October, which the locals tell us might be a bit late depending on the year. But no matter. We did hook one large fish that, nearly in our hands on the bank, made one last dash and snapped the line. (Note to self: next year remember the net.) Such is fishing. The anglers that worked at it and really spent time on the water caught fish. But it seemed they put in an hour or more per fish. The preferred method, and the one catching the fish, was bobbers with egg clusters. The Siuslaw flows through a lot of ancient sandstone, so it’s relatively shallow throughout. This means the fish hang in channels or depressions, looking for the deeper water. Watch where the locals fish. They know these spots well. The bonus in all of it was the scenery. The Siuslaw River in the fall is a spectacular mix of yellows, oranges and greens. The banks are lined with maple and vine maple, alder and of course plenty of fir, hemlock and cedar. It’s rich with bird life, plus deer and elk. You get into country like this, and landing a fish becomes quite secondary.

We’ll be back next fall. With a landing net. Trolling the in the bay, at Florence.