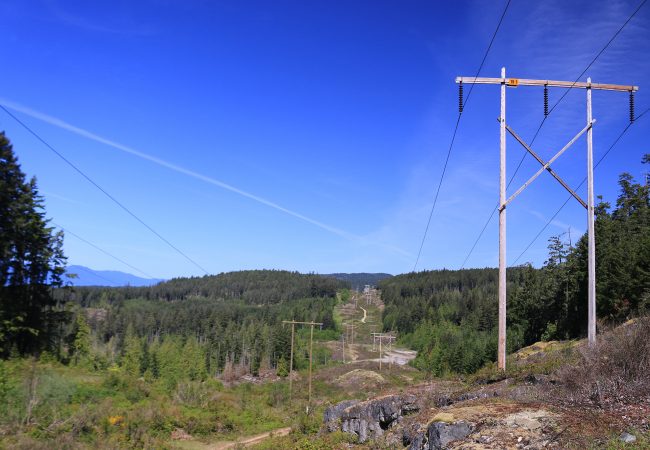 This morning I set out for a walk beneath the transmission lines that carve a scar the length of BC’s Sunshine Coast. It’s not a gorgeous setting, with its towering poles and crossarms, the buzzing wires, the rutted dirt road.

But the bushes and small trees provide good songbird and butterfly habitat. Elk feed on the ferns and shrubs and grasses. In the summer, you’ll find freakishly big huckleberries. I like the sky and the open views, where I often see hawks and eagles and the occasional black bear salivating after those berries. And I don’t know about you, but I like having electricity in my house. Which made me think about this remarkable song called Eugene, by the folk singer Greg Brown, in which he ponders a lost dog: “Sometimes you gotta not look too hard,” he says. “Just let the dog find you.”

I like Greg Brown. I like his music. The man sings with a charming honesty about everything from baseball to booze to bass fishing. I mean, seriously. What’s not to like?

So I took his advice. I sat on a stump, trusting in Rosie’s innate sense of direction. To let her find me. That’s when I remembered another Greg Brown song called If I had Known, where he tells this wonderful story about fishing as a kid with his friend Jimmy. They’re trying their luck in a little creek “you could spit across” that people in town tell them has no fish.

The boys persevere, because that’s what kids do when they’re passionate about something and having fun. They make one more cast before heading home for the evening, resulting in what, to any fishing nut, must be one of the great lines in folk music:

“Jimmy and me walked home slow that night…right down Main Street, in our P.F. Fliers, with two five-pound bass making grown men liars.”

Man, I knew that feeling as a kid, fishing in southeast Portland’s Johnson Creek before pollution finished it off. Lots of people told me “there ain’t no fish in there.” Just like the song, I used to walk home late, right through our urban neighborhood in my muddy black Converse low-tops, carrying stringers of trout under the streetlamps.

Anyway, back to Brown’s rambling song Eugene, which I think is about giving yourself time to wander and reflect without letting the modern world get you down. He packs a bamboo fly rod, an old leather case of flies, and he sets out across America. He starts in Eugene, where he heads “…up and down the Willamette, dammit, on the back, back roads” in search of trout and answers and peace. And a dog.

“Sometimes you got to go look for your life,” he says.

So I’m sitting there, thinking about fishing and wandering and my own crazy search over the years, and here comes Rosie, crashing through the forest and into the clearing with her pink tongue flopping and her big eyes full of some grand dog adventure. I hugged her and talked to her and off we went as if nothing had happened. Sometimes you gotta let the dog find you.

Right after that, a butterfly landed on the road. Then another. I took pictures. I had packed the camera with no particular subject in mind. Perhaps some shots of migratory songbirds—a warbler maybe, or a flycatcher. Maybe I’d get lucky and photograph one of those bears. Besides the butterflies, I found a chipmunk. Bumblebees. Lots of elk crap. I photographed all of it. Because it was fun. The Sunshine Coast elk population is growing 20% per year. Thus, this stuff is everywhere.

And that’s when I realized that many of my favorite photo opportunities show up when I’m not really looking for one. In effect, by simply letting the dog find me.

Or perhaps more fittingly, and also from Greg Brown’s Eugene: “Sometimes you gotta go not look for nothin.”